The project adopts intersectional feminism as its framework, taking into account how issues of class, race, disability and sexuality intersect with feminism and how this has been recognised in Dunedin, or not. We identify intersectional feminism as the avant-garde of feminism today and the most progressive descendent of suffrage, as it includes and recognises a diverse array of perspectives and experiences which feminism has previously failed to take into account.

Artist Julia Young (with Megan Brady, both of Studio2 and the Margaret Freeman Gallery) comments on issues of diversity and difference in her 2015 work The Meeting of New Friends. The painting depicts an encounter between different species, which is initially characterised by fear – before the characters come to an understanding and acceptance of their difference through dialogue. The scenario depicted acts as a metaphor for the ways in which individuals with physical or intellectual disabilities may be approached with fear, stereotyping or prejudice and how this may be resolved through adopting an open-mind and practicing acceptance. In A Very Important Message (2015), Young comments on the use of the term ‘retard’ as a moniker unacceptable to those in the Dunedin community who experience physical and intellectual disabilities.

In the video work Waltz (2010), artist Sophie Black depicts the rural city of Mataura and the nature and creeping obsolescence of rural life in wider Dunedin. This work links to our interview with Alana Kelly in the publication, who discusses the unique issues facing rural women in greater Dunedin, such as a lack of access to essential services and stereotyped gender roles.

Emma Chalmers’ series of watercolours in Around the Block on Tenterhooks (2012) depicts pro-life protests, which have taken place outside the Dunedin Hospital in recent years - as well as the pro-choice counter protests to these initiated by the Dunedin Feminist Collective (now the Dunedin Intersectional Feminist Discussion Group). These protests have a legacy dating back to the 1970s when the Dunedin Collective for Woman lobbied for changes to abortion laws in New Zealand and protested for these in Dunedin. An interview with Jocelyn Harris, one of the founding members for the Dunedin Collective for Woman, can be found in the publication.

Since operating as an artist in the Women’s Art Movement in New Zealand in the 1970s, Janet De Wagt has always wished to take into account a multiplicity of perspectives relating to class, race and sexuality in her work. In Unravelling Ancestors - Mary Southerwood (2014), De Wagt has painted a portrait of her friend Mary Southerwood, outlining the varying strands of Mary’s ethnic descent. Through so doing, De Wagt honours and celebrates all facets of Mary’s background.

Simone Montgomery provides a mana whenua women’s perspective in her work Waipunarangi (2018). Waipunarangi is a star in Māori mythology associated with rain, water and conservation. Through creating a garment for Waipunarangi, Montgomery connects with and honours her own culture via the process of making. Feminism as it has traditionally been practiced has been a problematic term for Montgomery – the artist views Māori women’s position in her culture pre-colonisation as equal to that of Māori men, an equality which she sees as being reflected in Māori mythology and the influential female presence embodied there. These issues are further discussed in our interview with Vicki Lenihan and Donna Matahaere-Atariki in the publication.
Swaroopa Unni’s photograph Illuminate (2016) depicts her traditional Indian dance practice in Dunedin where she has lived since 2010. This practice has been a means of the artist connecting with and sharing her cultural heritage, in a city where she has sometimes experienced herself as a foreigner given her status as an ethnic minority in the Otago region.

In his work, Party Zone (2015-2016) Matthew Wightman explores toxic masculinity through sampling the dialogue and imagery of pro-wrestling. Inspired in part by his experiences of masculine culture while studying at Otago University, Wightman’s work speaks to how men are a product of our patriarchal culture, where aggression and domination exist along top of a deep and often unresolved desire for closeness and connection.

In Sarah Baird’s work All The Things Anyone Has Ever Said To Me (2018) 150 digital posters are displayed one after another in a mirror revealing misogynistic, racist and *phobic comments that have been directed at people based in Dunedin. The accompanying drawings are in response to Baird’s personal experiences of offensive comments while she was working part-time in Dunedin. Such comments reveal the latent attitudes present in our culture that lead to oppressive narratives and actions.

Marewa Severne’s mixed media piece Wai Rua (2018) represents a woman with her hair spread out, rather like a mountain. The work depicts the artist’s journey from creation to where she stands today in Otepoti (Dunedin) and the many challenges that faced her on her way: being an emergency responder, mother, Kaiako, Tauira, a wife and a cancer free wahine. Severne notes “the distinctiveness of mana wahine is such that it enables Maori women to analyse and understand our place in the world on our own terms. Ko Hine Titama koe, matawaia te whatu I te tirohanga atu (The eyes water to behold the dawn maiden Hine Titama).” The paintings Etu (2018) and Lines on her Chin (2018) sit alongside poems by Rachel Dibble. This collaboration came about through a korero between the artists about wairua, their journeys as two Taranaki women and their tamariki far away from their Turangawaewae - while living alongside the Otepoti sea and landscape.

Popular posts from this blog 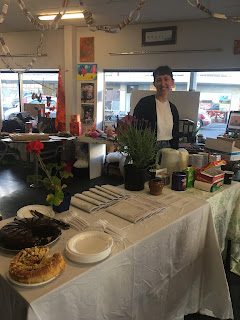 This was the final event of our two-week long travelling exhibition and publication ‘Intersectional Feminism in Dunedin: From Suffrage to Today’ – a project to commemorate the 125th anniversary of suffrage in New Zealand. In this intimate event, speakers told tales of their experiences relating to Intersectional Feminism in Dunedin. Hot drinks were served along with a piece of vegan chocolate cake. STORYTELLERS: Julia Young is an artist of Studio2 and the Margaret Freeman Gallery whose practice comments on issues of diversity and openness to difference.  Janet De Wagt is a community artist with international experience who operated in the Women’s Art Movement in New Zealand in the 1970s. De Wagt has worked on hundreds of community-based projects and is interested in helping people to express themselves in the arts.  Sam Fleury has an honours degree in philosophy, economics and politics. He is part way through his Dip-Grad in computer science and is interested in narrative in video game
Read more

Intersectional Feminism in Dunedin: From Suffrage to Today - Exhibition and Publication

- August 12, 2018
This blog is the online component of a two week long exhibition and publication in Dunedin, New Zealand in September 2018 which aims to examine the story of suffrage in Dunedin and track the subsequent history of feminism in this city from 1893 to today. We will be considering this history through an intersectional feminist framework, taking into account how issues of class, race, disability and sexuality intersect with feminism and how this has been recognised in Dunedin, or not. The project will identify intersectional feminism as the avant-garde of feminism today and the most progressive descendent of suffrage, as it includes and recognises a diverse array of perspectives and experiences which feminism has previously failed to take into account. It will also honour the work of activist women and men who have paved the way for greater equality in Dunedin, as well as identify where we are today and how far we have to go.  In our publication, we will consider the suffrage story
Read more

This blog is the online component of a two week long exhibition and publication in Dunedin, New Zealand in September 2018 which aims to examine the story of suffrage in Dunedin and track the subsequent history of feminism in this city from 1893 to today through an intersectional feminist framework.
VENUES
14 - 21 September: Exhibition at Geoff's (Allbell Chambers, 127 Lower Stuart St, 2nd floor) from 10am - 4pm, daily.
23 - 28 September: Exhibition at Studio2 and the Margaret Freeman Gallery (125 King Edward St, South Dunedin) from 10am - 4pm, daily.
EVENTS:
14 September - 5.30pm - 8pm: Opening at Geoff's
21 September - 5.30pm - 7pm: Joint event with Otago Polytechnic - Pecha Kucha at Geoff's featuring Bridie Lonie, Michele Beevors, Hana Cadzow and Sarah Baird.
28 September - 5.30pm - 8pm: Story-telling evening with artists Julia Young, Janet De Wagt and Swaroopa Unni, poet Eliana Gray and more at Studio 2 and the Margaret Freeman Gallery (125 Kind Edward St, South Dunedin).
CONTACT
If you are interested in getting in touch with us regarding this project please contact kari.petroschmidt@gmail.com and/or lydiemia@hotmail.co.nz.